A Walk in the Footsteps of Christ 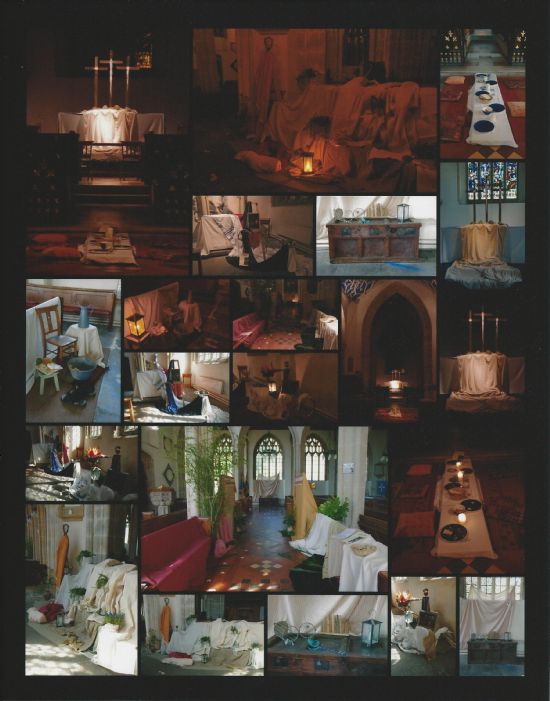 Holy Week 2014 : A meditation travelling from the Entry into Jerusalem on Palm Sunday to the Crucifixion on Good Friday.

When they had come near Jerusalem and had reached Bethphage, at the Mount of Olives, Jesus sent two disciples, saying to them, ‘Go into the village ahead of you, and immediately you will find a donkey tied, and a colt with her; untie them and bring them to me. If anyone says anything to you, just say this, “The Lord needs them.” And he will send them immediately.’  This took place to fulfil what had been spoken through the prophet, saying,

‘Tell the daughter of Zion,
Look, your king is coming to you,
humble, and mounted on a donkey,
and on a colt, the foal of a donkey.’

‘Hosanna to the Son of David!
Blessed is the one who comes in the name of the Lord!
Hosanna in the highest heaven!’

When he entered Jerusalem, the whole city was in turmoil, asking, ‘Who is this?’  The crowds were saying, ‘This is the prophet Jesus from Nazareth in Galilee.’

Jesus Cleanses the Temple in Jerusalem 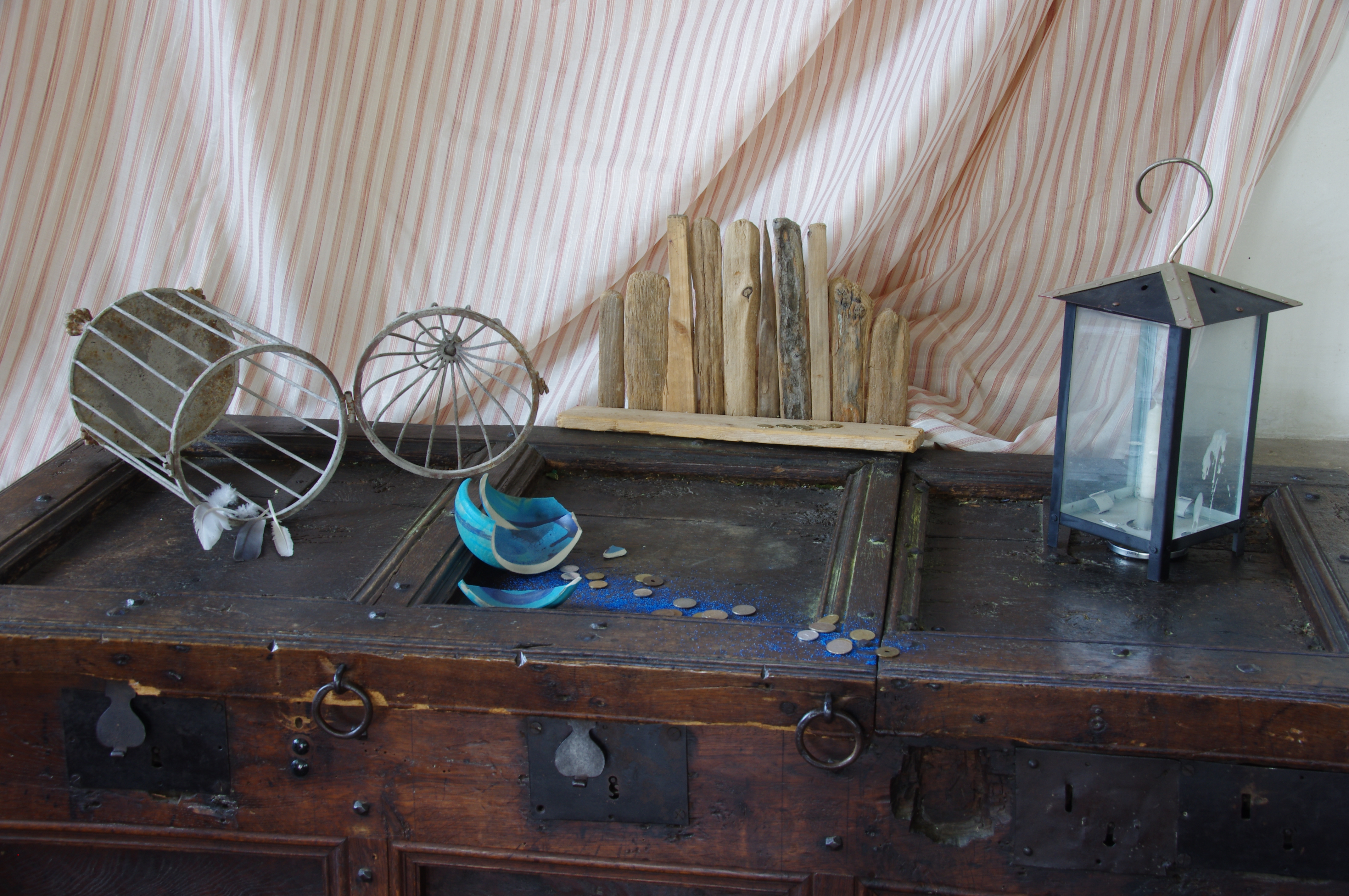 Then they came to Jerusalem. And he entered the temple and began to drive out those who were selling and those who were buying in the temple, and he overturned the tables of the money-changers and the seats of those who sold doves; and he would not allow anyone to carry anything through the temple. He was teaching and saying, ‘Is it not written, “My house shall be called a house of prayer for all the nations”?    But you have made it a den of robbers.’

And when the chief priests and the scribes heard it, they kept looking for a way to kill him; for they were afraid of him, because the whole crowd was spellbound by his teaching. And when evening came, Jesus and his disciples went out of the city.

Jesus, knowing that the Father had given all things into his hands, and that he had come from God and was going to God, got up from the table, took off his outer robe, and tied a towel around himself.  Then he poured water into a basin and began to wash the disciples’ feet and to wipe them with the towel that was tied around him.

He came to Simon Peter, who said to him, ‘Lord, are you going to wash my feet?’  Jesus answered, ‘You do not know now what I am doing, but later you will understand.’  Peter said to him, ‘You will never wash my feet.’ Jesus answered, ‘Unless I wash you, you have no share with me.’  Simon Peter said to him, ‘Lord, not my feet only but also my hands and my head!’  Jesus said to him, ‘One who has bathed does not need to wash, except for the feet, but is entirely clean. And you are clean, though not all of you.’  For he knew who was to betray him; for this reason he said, ‘Not all of you are clean.’ 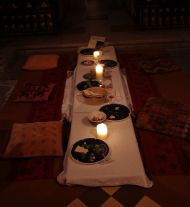 After he had washed their feet, had put on his robe, and had returned to the table, he said to them, ‘Do you know what I have done to you?  You call me Teacher and Lord—and you are right, for that is what I am. So if I, your Lord and Teacher, have washed your feet, you also ought to wash one another’s feet.'

Love bade me welcome: yet my soul drew back,
Guilty of dust and sin.
But quick-eyed Love, observing me grow slack
From my first entrance in,
Drew nearer to me, sweetly questioning
If I lacked anything.

The Garden of Gethsemane

They went to a place called Gethsemane; and he said to his disciples, ‘Sit here while I pray.’

He took with him Peter and James and John, and began to be distressed and agitated. And he said to them, ‘I am deeply grieved, even to death; remain here, and keep awake.’

And going a little farther, he threw himself on the ground and prayed that, if it were possible, the hour might pass from him.  He said, ‘Abba, Father, for you all things are possible; remove this cup from me; yet, not what I want, but what you want.’

He came and found them sleeping; and he said to Peter, ‘Simon, are you asleep? Could you not keep awake one hour?  Keep awake and pray that you may not come into the time of trial; the spirit indeed is willing, but the flesh is weak.’  And again he went away and prayed, saying the same words.

And once more he came and found them sleeping, for their eyes were very heavy; and they did not know what to say to him.

Watch and pray
Can we not stay
Awake?
For whose sake
The cup
Grasped faithfully
Against the yawning
Drop of fear?…
The heart-rent agony
Of our own
Gethsemane
A stone’s throw
Away.

He came a third time and said to them, ‘Are you still sleeping and taking your rest? Enough! The hour has come; the Son of Man is betrayed into the hands of sinners.  Get up, let us be going. See, my betrayer is at hand.’

While Peter was below in the courtyard, one of the servant-girls of the high priest came by.  When she saw Peter warming himself, she stared at him and said, ‘You also were with Jesus, the man from Nazareth.’  But he denied it, saying, ‘I do not know or understand what you are talking about.’  And he went out into the forecourt. Then the cock crowed.

And the servant-girl, on seeing him, began again to say to the bystanders, ‘This man is one of them.’  But again he denied it.

Then after a little while the bystanders again said to Peter, ‘Certainly you are one of them; for you are a Galilean.’  But he began to curse, and he swore an oath, ‘I do not know this man you are talking about.’

At that moment the cock crowed for the second time. Then Peter remembered that Jesus had said to him, ‘Before the cock crows twice, you will deny me three times.’

And he broke down and wept.

As soon as it was morning, the chief priests held a consultation with the elders and scribes and the whole council. They bound Jesus, led him away, and handed him over to Pilate.

Pilate asked him, ‘Are you the King of the Jews?’ He answered him, ‘You say so.’  Then the chief priests accused him of many things.  Pilate asked him again, ‘Have you no answer? See how many charges they bring against you.’  But Jesus made no further reply, so that Pilate was amazed.

Now at the festival he used to release a prisoner for them, anyone for whom they asked.  Now a man called Barabbas was in prison with the rebels who had committed murder during the insurrection.

So the crowd came and began to ask Pilate to do for them according to his custom.  Then he answered them, ‘Do you want me to release for you the King of the Jews?’  For he realized that it was out of jealousy that the chief priests had handed him over.  But the chief priests stirred up the crowd to have him release Barabbas for them instead.

Pilate spoke to them again, ‘Then what do you wish me to do with the man you call the King of the Jews?’  They shouted back, ‘Crucify him!’  Pilate asked them, ‘Why, what evil has he done?’ But they shouted all the more, ‘Crucify him!’

So Pilate, wishing to satisfy the crowd, released Barabbas for them; and after flogging Jesus, he handed him over to be crucified. 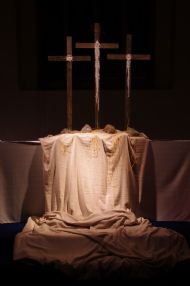 Then the soldiers led him into the courtyard of the palace (that is, the governor’s headquarters); and they called together the whole cohort.  And they clothed him in a purple cloak; and after twisting some thorns into a crown, they put it on him.  And they began saluting him, ‘Hail, King of the Jews!’  They struck his head with a reed, spat upon him, and knelt down in homage to him.  After mocking him, they stripped him of the purple cloak and put his own clothes on him. Then they led him out to crucify him.

They compelled a passer-by, who was coming in from the country, to carry his cross; it was Simon of Cyrene, the father of Alexander and Rufus.  Then they brought Jesus to the place called Golgotha (which means the place of a skull).  And they offered him wine mixed with myrrh; but he did not take it.  And they crucified him, and divided his clothes among them, casting lots to decide what each should take.

It was nine o’clock in the morning when they crucified him.  The inscription of the charge against him read, ‘The King of the Jews.’  And with him they crucified two bandits, one on his right and one on his left.  Those who passed by derided him, shaking their heads and saying, ‘Aha! You who would destroy the temple and build it in three days,  save yourself, and come down from the cross!’  In the same way the chief priests, along with the scribes, were also mocking him among themselves and saying, ‘He saved others; he cannot save himself.  Let the Messiah, the King of Israel, come down from the cross now, so that we may see and believe.’ Those who were crucified with him also taunted him.

When it was noon, darkness came over the whole land until three in the afternoon.  At three o’clock Jesus cried out with a loud voice, ‘Eloi, Eloi, lema sabachthani?’ which means, ‘My God, my God, why have you forsaken me?’  When some of the bystanders heard it, they said, ‘Listen, he is calling for Elijah.’  And someone ran, filled a sponge with sour wine, put it on a stick, and gave it to him to drink, saying, ‘Wait, let us see whether Elijah will come to take him down.’

Then Jesus gave a loud cry and breathed his last.

Some Prayers at the Foot of the Cross 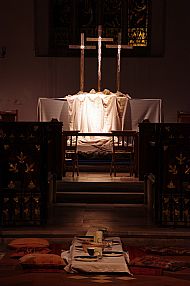 Soul of Christ, sanctify me
Body of Christ, save me
Blood of Christ, inebriate me
Water from the side of Christ, wash me
Passion of Christ, strengthen me
O good Jesus, hear me
Within thy wounds hide me
Permit me not to be separated from thee
From the wicked foe defend me
At the hour of my death call me
And bid me come to thee
That with thy saints I may praise thee
For ever and ever.   Amen.

Lord, your love is broken open
among cheering crowds and traitor’s coins,
deserting friends and hands washed clean,
the mockery of power and the baying mob:
as we follow your way of passion,
give us the faith to bring our weak and divided
hearts to the foot of the cross
and the door of the unguarded tomb
that they might be opened, astonished and healed;
through Jesus,
who carries the weight of the world on his cross.

O most merciful Redeemer, Friend, and Brother,
May I know thee more clearly,
Love thee more dearly,
And follow thee more nearly:
For ever and ever.